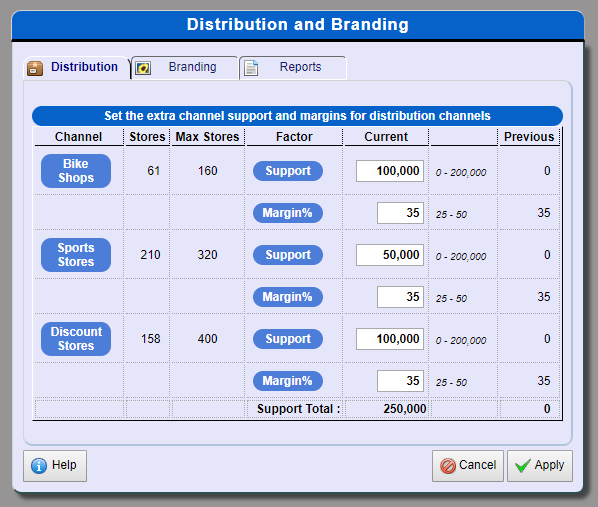 Distributors look at the total dollar amount of margin earned from stocking each firm’s products last year. Based on that, each Distribution Channel will decide how many stores will stock products from each firm.

The total amount of margin a Distributor receives is affected by your:

So all other things being equal, if you sell more products, or increase your Retailer margin then more Distributors will be willing to stock your products and your distribution indexes will increase.

The number of each type of distributor willing to stock your products is then combined with the shopping habits of each segment to give a segment level distribution index. This is why you see different distribution indexes in the Market Summary / All Product Details report.

Have a Question of the Week suggestion? Send this to us here or message us on Facebook. 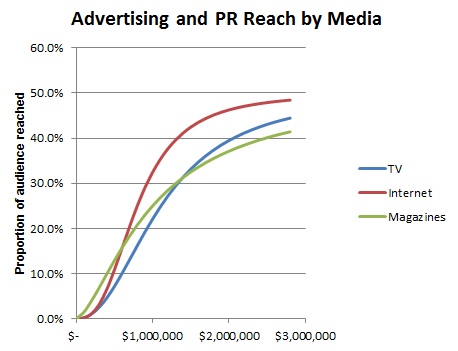 The sensitivity to Advertising and PR reflects how much each market segment is influenced by any Advertising or PR they are exposed to.  If a segment has low sensitivity to PR, then even if they are exposed to a lot of it, there will be a much smaller influence than if they are highly sensitive to PR. If a segment is highly sensitive to Advertising, then there is probably going to be a reasonable market share difference, but if there was low sensitivity to PR then you would probably only see a small market share difference (ie. you are probably wasting a lot of your PR spend and you should look at more effective ways of using that money). The market segments have different sensitivities, so you need to find balance between Advertising Awareness and PR in each market.

The 2017 MikesBikes World Championship winners Siyi Tang , William Setiawan , Jiedong Chen, Jayca Y. Siddayao, Mingchang Liang and Robbi A. Harnass of Exodus from the University of Auckland have joined the MikesBikes Wall of Champions with their impressive performance in the competition!

Team Exodus competed against the best teams from around the globe and have achieved a Shareholder Value of $327.81.

To wrap up the 2017 MikesBikes World Champs, we have interviewed the team and ask them about their experience in the competition and what they thought about the simulation.

What is your decision making process within the simulation?

First, we analysed the market scenario then we looked at trends in pricing, marketing, financial performance and so on. We then compared these trends with our previous decisions and results.

Finally, we were able to determine whether we would have an offensive or defensive strategy. The most important thing for us is that the final decisions entered have been approved by all team members.

What was your strategy going into the simulation?

Our strategy was focused on developing low prime cost bikes. This strategy did not require a high investment in plant or workforce.

We then focused on our marketing campaign. We developed a marketing mix suitable for our strategy.

Knowing how to calculate the optimum marketing mix, we were able to reach more customers than if we just allocated a high expenditure on every media channel.

Finally, with regards to our financial decisions, we made sure to repurchase shares as soon as we had the additional funds and no profitable use for our extra cash. We were also able to pay out dividends to shareholders.

What challenges did you face? How did you overcome these?

Our competitors undoubtedly did their best to compete. They presented us with fearsome competition during the Championship. Our team also felt that some of the firms just gave up along the way and purposefully destroyed the market by dumping their prices. Pity moves indeed. But then again, it was one of the “unexpected” things that you would not expect to happen, especially during a fierce competition such as this.

Was there anything, in particular, you did that you think helped to prepare yourself?

One of the things that helped us win the world championship was the opportunity to compete with our fellow classmates. In a way, we were used to playing in such a competitive environment, with fearless competitors. However, even with such experience, there were moments during the world championships that we felt very overwhelmed by our competitors’ moves. Thus, once again, kudos to all who fought until the end.

What do you think of the business simulation?

We think MikesBikes simulation is a great way to teach people who want to learn Business Management. It has both practical and theoretical application that gives us real world experience that we would never get from attending traditional lectures and doing written tests.

For example, when we were looking to enter a more competitive market, we were intrigued to find more detailed information. Reports such as the Income Statement, Cash-Flow Statement, Balance Sheet, and Equity Movements Statements were extremely helpful. We made sure to analyze these reports every rollover.

Comments on your experience with the simulation itself

We had a great experience with the simulation. We are glad that we have used this simulation, especially for those of us who have never worked in the industry. By competing in the course competition at the University of Auckland and entering the MikesBikes 2017 World Championship, we learned so many new things, such as:

Nevertheless, we are honored to be called the winners of MikesBikes 2017 World Championship. There are many decisions that we made, which definitely could be further improved. We hope that newcomers will join the next world competition of MikesBikes, to stand beside us, and the rest of the MikesBikes World Champ Winners.

Check out the 2017 Competition Results here and the previous winners here.

“Success is not final, failure is not fatal: it is the courage to continue that counts.” – Winston Churchill

These two teams were neck-and-neck in the last few rounds of the competition battling for first place. Both teams constantly putting pressure on each other to adapt to their market and make growth-orientated decisions.

Our MikesBikes World Champs winning team, Exodus had the following to say:

Our experience with the simulation has been unimaginable. We are glad that we have done the simulation, most especially since none of us have worked in the business industry. By doing the course competition at the University of Auckland, and entering the 2017 MikesBikes World Championship, we learnt so many new things. Such as, how to wisely allocate our marketing budget, how to turn a significant investment in project development into something more profitable in the long run, how to calculate the cause and effect between the decision of repurchasing shares and dividend, and many more. Nevertheless, as much as we are honoured to be called the winner of the 2017 MikesBikes World Championship, let us restate the fact that we are far from perfect. There are many things that we’ve done, which can be further improved. We hope that newcomers will aim to enter the next MikesBikes World Champs and to stand beside us, and the rest of the winners.

A huge congratulations to all the teams who have participated in the 2017 MikesBikes World Champs!

You can view the current and past winners here.