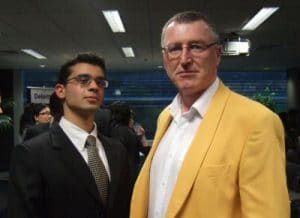 Danny Master from Smartsims with Brendon Potter of MCC 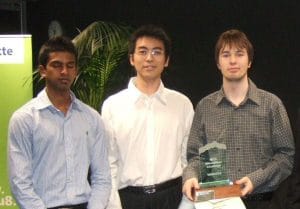 The 2nd of October saw the University of Auckland’s Business School play host to the Management Consultancy Club’s 2009 awards ceremony, where the winners of the annual MCC MikesBikes Challenge were crowned.

MCC is the brainchild of Brendon Potter, and is active throughout the year running Open Case Competitions, Stock Market Challenges, and an annual MikesBikes Competition. Having run the MikesBikes competition for three years now, Smartsims have followed the competitors’ performance with great interest. Every year, the challenge increases to a whole new level with better strategies, calculated risks, and of course fiercer competition.

The top two teams, Meritocratic Society and OGC, managed not only to pull away from the competition, but also shatter previous top shareholder value records with $92.41 and $86.50 respectively. John and Charles of Bradford Says Smack, the team that ranked third, have been participating in this competition for a couple of years now. In fact, the two paired up not only expecting to be in the top three, but had also made plans of how and where they’d be spending their prize money.