Welcome to the MikesBikes World Championship (MWC) page recounting the historic winners of this competition year to year. 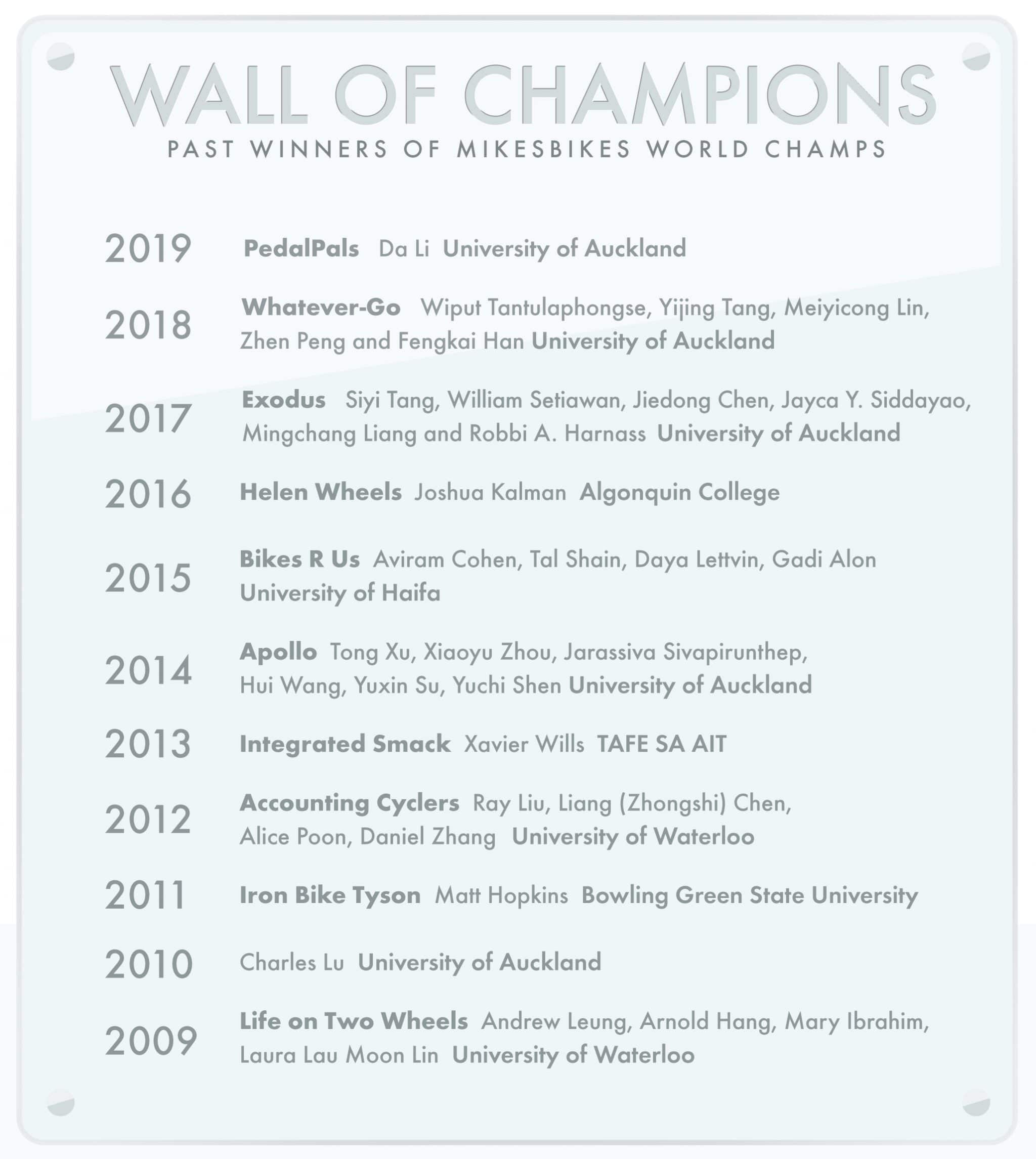 163 students from around the globe, 97 firms and two weeks of intense competition – we now have the Winner of the 2019 MikesBikes World Champs.

The 2019 MikesBikes World Champs Winner is Mila Lee from University of Auckland!

We are proud to announce that Mila Lee of PedalPals from University of Auckland is the 2019 MikesBikes World Champs Winner! Congratulations Mila for this outstanding achievement!

After the first rollover, Mila came in at third place. However, she has successfully managed to retain the top position throughout the remaining rollovers. Your determination and dedication to succeed certainly showed. We are sure that a lot of students will be inspired by your success.

In Second Place, we have Jin Fong and Luther Gray from Manukau Institute of Technology!

Congratulations Jin Fong and Luther Gray from Manukau Institute of Technology for coming in at second place!

We have seen your journey throughout the competition. There were certainly a lot of ups and downs. However, because of your drive to succeed and your impressive abilities, you were able to achieve success in this year’s competition.

Our 2018 MikesBikes World Champs is Whatever-Go from University of Auckland! Big congratulations to Wiput Tantulaphongse, Yijing Tang, Meiyicong Lin, Zhen  Peng and Fengkai Han for this outstanding achievement! They have managed to achieve the second highest Shareholder Value from the past 9 MikesBikes World Champs!

In second place, we have Swan from De Anza College with Makysm Chernenko and in third place, we have NGUYEN Inc with Nguyen Pham from Selkirk College. Incredible work, well done!

Congratulations to everyone who participated in the competition! You have all done very well and carried your school with pride!

These two teams were neck-and-neck in the last few rounds of the competition battling for first place. Both teams constantly putting pressure on each other to adapt to their market and make growth-orientated decisions.

A huge congratulations to all the teams who have participated in the 2017 MikesBikes World Champs!

The Sixth and Final Round rollover for the 2016 MWC was processed on Tuesday, December 20, 2016. Algonquin College’s Helen Wheels was the winner of the Competition, maximizing Shareholder Value in a tough marketplace. The University of Auckland’s Bat Wheels came in well deserved second place.

Our two winners had the following to say: 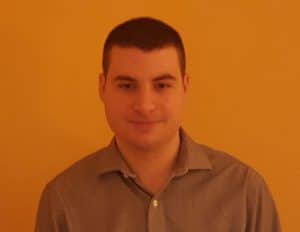 “That was a very aggressive first round by everyone. Even though the ending SHVs may not reflect it, the first few rollovers were challenging. It was fun competing with everyone and putting concepts I learned from school into practice.”

Second Place: Bat Wheels from the University of Auckland 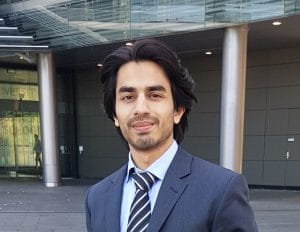 “Never knew running my own company could be so much fun.  Smart Sims has provided us with a great business simulation and I will miss being a part of this competition”

The Sixth and Final Round rollover for Smartsims’ 2015 MikesBikes World Champs concluded with Bikes R Us from University of Haifa executing a strategy with perfect timing and precision, ultimately reigning supreme! Leshaw from University of Auckland managed to finish a solid second, winning a tough battle against other contenders.

First Place: Bikes R Us from the University of Haifa 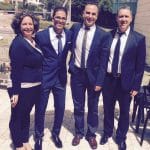 “After two second place in the past for the University of Haifa we are proud to finally win this competition. We took the lead in the second round and it was very challenging to keep it to the final round. It was a very great experience to compete both against our friends from the university and in 2015 Championship.

It was a great learning experience to play in MikesBikes, we would like to thank the other competitors from the finals and we wish everyone success in the future.” – Bikes R Us

Second Place: Leshaw from the University of Auckland

Congratulations to all those who competed in this year’s competition and wish you well in your future endeavours.

A full Scoreboard can be seen below:

First Place: Apollo from the University of Auckland

“It is an amazing experience to compete in MBWC, 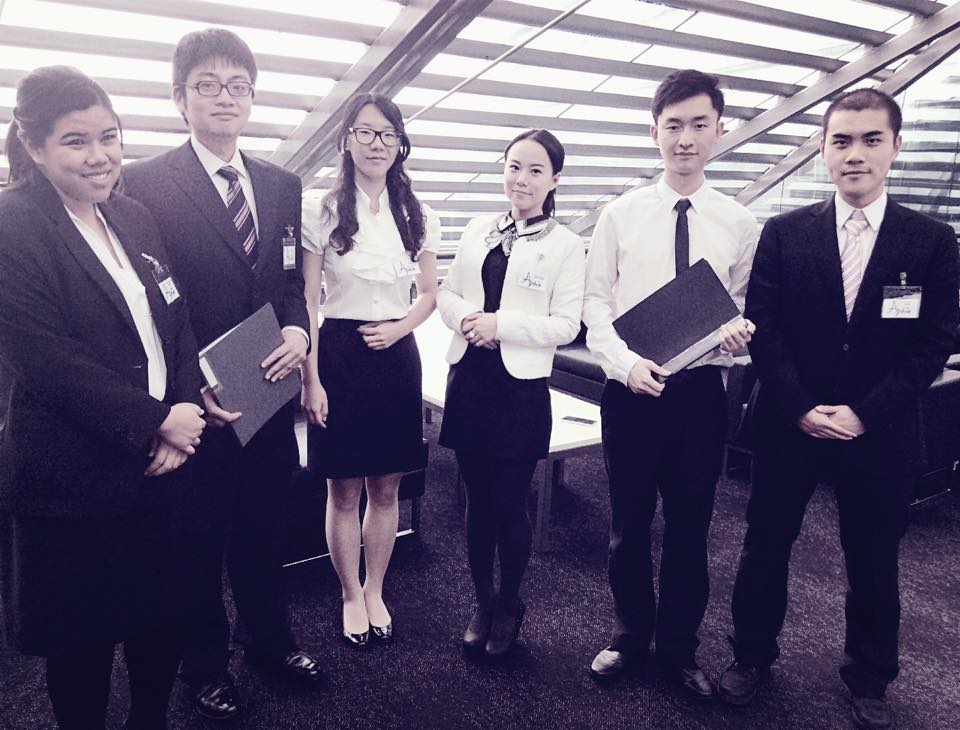 and this game provided us with great opportunities to improve business analysis skills, team work and communication skills. We really appreciate it” – Hui from Team Apollo

Congratulations to both teams and thank you everybody who participated! It was another great year and another intense competition!

The final scoreboard is below:

The sixth and final rollover for Smartsims’ 2013 MikesBikes World Champs was processed leaving the ultimate Champion is Xavier Wills from TAFE South Australia. All firms started the competition with a similar strategy but through unrelenting focus on the market, his firm and the products his firm was selling, Xavier Wills climbed up the leader-board, continuing to adapt to survive and excel!

“Competiting in the Mikes Bikes Championships was a great learning experience and has helped further my understanding of business and marketing principles, especially in regards to meeting the demands of the consumer. It was a very tough competition and full credit to SPIRIT BIKES, who were almost impossible to overcome. Best of luck to all of the competitors from the finals, I wish them all the best for their future business endeavors.” – Xavier Wills, Integrated Smack

The top performing firm was followed closely by SPIRIT BIKES, run by the University of Haifa’s dedicated students, Oren Feldman and Sharon Sisso. They gave a solid challenge till the very end and had us here at Smartsims guessing till the last minute!

It is no easy task being successful in the midst of giant conglomerates like the Top 2, but Middle Georgia State College’sHamid Ganjikia found a position for his firm Cyrus to not only survive, but also thrive!

The 2013 MWC is the most interesting competition we’ve seen in recent times and it was no small feat to get to the Final Round. We would like to wish all the firms in the Final Round, not just the winners, all the best for their future endeavours! It was a pleasure spectating and we hope the Competition has been a great learning and fun experience for all of you.

Here are the results from the Final Rollover:

The 2012 MikesBikes-Advanced World Champions are…

First Place to Accounting Cyclers from the University of Waterloo – 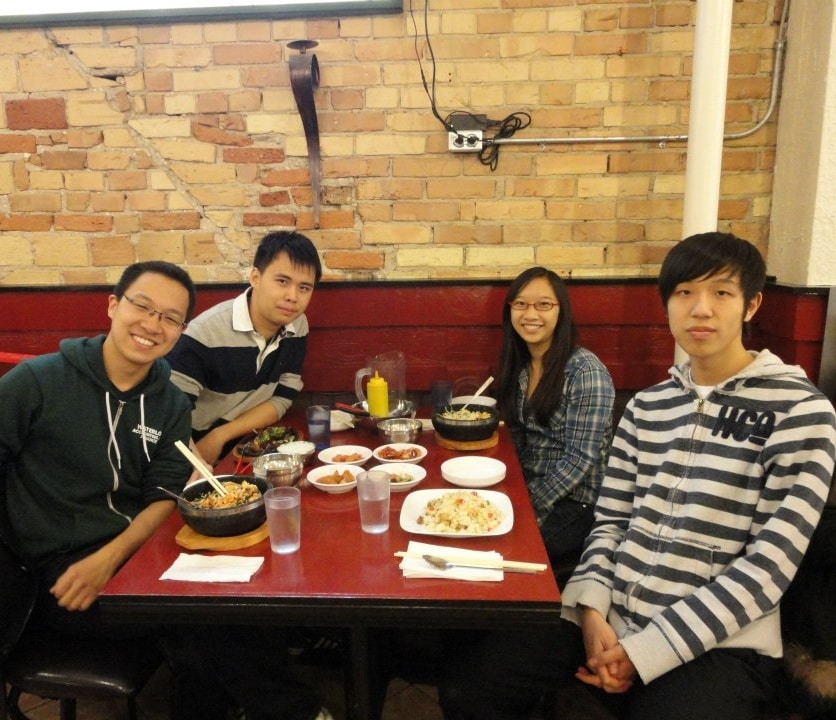 With its fair share facing challenges, the Accounting Cyclers rose against powerful competitors like SAPYU and Still Life on a Pear, executing a well-timed strategy to come far ahead of the competition. The winners had a great experience synthesizing teamwork with victory.

“It was an amazing experience competing in the MikesBikes World Championship – thank you for providing us with the opportunity to use our skills and teamwork in such a dynamic business simulation game” – Accouting Cyclers’ Spokesman, Daniel Zhang

Second Place to SAPYU of Drexel University – Starting off as a strong contender, SAPYU stayed in top positions throughout the duration of the competition! The firm’s greatest strength was its ability to grow steadily despite constant changes to the industry.

“MikesBikes-Advanced has been a very good learning tool. 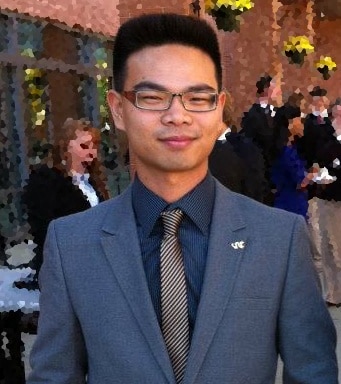 Being able to manage marketing, operations and financing all together and see the results of our decisions in first hand was not a small thing. The competition during the final round was intense, nothing was set until the last rollover. This experience will be very helpful to any career” – SAPYU Spokesman, Weilei Yu

The 2011 MikesBikes-Advanced World Champions are…

First Place to Matt Hopkins – Hailing from Bowling Green State University, USA, Matt veered his firm Iron Bike Tyson to victory, while competing with other powerhouse firms like ELOTI and Fairly Cool Cycles. Having established a strong foothold in the market from early on, Matt says he found the competition fun and extremely competitive!

“I would first like to thank all the competitors, you made this an extremely challenging competition. I constantly

found myself questioning and tweaking my strategy to adapt to the hyper-competitive market. Overall, this
was an excellent experience and I couldn’t be any happier” – Matt Hopkins

Second Place to Tomer Weistuch, Inbal Nishlis, Ortal Azulay and Liora Barac – Competing from the University of Haifa, Israel, this team stayed in top positions all throughout the competition. The firm’s biggest strength was being long term sustainable, while maintaining steady profits. Team spokesperson Tomer Weistuch passes on this message:

” Thanks for the opportunity to learned a lot about business through the game. It was a great learning experience” – Eloti

The competition was a huge success and Smartsims would like to congratulate all those who competed this year competition. We wish you well in your future endeavours and thank you for the value you added to this event.

The 2010 MikesBikes-Intro World Champion is…

Charles Lu from the University of Auckland.

Congratulations to Charles who narrowly won the final ahead of Garett Webb with a SHV of $97.14. Special mention also goes to Mark Delecate from the Munich Business School who won the Plate Final. Check out the Final Scoreboard below for a full run down.

“It was very exciting to participate in this competition as 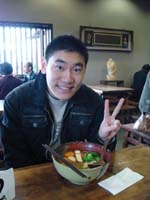 the result in the end was very close. I would also like to congratulate the other prize winners for their fine results. I have used MikesBikes a few times in the past and each time it offers a unique experience because there is no single best solution to the game. You have to respond to your competition as well as implement your own strategy. I am looking forward to participating in future events!”
– Charles Lu

Congratulations to the award winning participants:

The Cup Final competitors were neck to neck for most of the competition! While Garett Webb started out strong and maintained the lead for the first half of the game, Charles Lu executed his strategy with perfect timing and precision, ultimately reigning supreme! Special mention goes to Hieu Ha, who ran a very successful and profitable firm. Their firm was very cost effective, with profits nearly as high as the winners, even with lower sales.

In the Plate Final, while Tang Tang and Mark Delecate started out strong, it was Adam Thompson who was Mark’s main competition. However, Mark Delecate had a strong business plan, and always stayed ahead of the competition, ultimately winning the final prize.

Full credit goes to the winners who fought close battles and emerged as victors! From the Scoreboard report you can see that consistently large Profit margins won the competition for the firms. The top performing Firms did this through being the most efficient with their spending, achieving the most effect from each dollar spent.

On behalf of Smartsims, we would like to congratulate all those who competed in this year’s competition and wish you well in your future endeavours.

Congratulations to the teams below:

Full credit to Life on Two Wheels, who were able to push forward to top place mid-competition, and once there, have really dominated with a convincing win. Prizes will be awarded to the top two teams as advertised; we will be in contact shortly to discuss this.

The results speak for themselves; the remaining positions were a close battle heavily fought right down to the last rollover – you had us here at Smartsims on the edge of our seats. Special mention goes to team bbuNZ (New Zealand) who grabbed third place only on the final rollover. Congratulations to those remaining teams that were able to achieve over $200 SHV, Baldwin (Australia) and Legendary (New Zealand).

From the Scoreboard report you can see that although the top Firm did not have the highest Sales, it was their consistent large Profit margin that won them the competition (though large Sales definitely help to achieve that Profit). The top performing Firms did this through being the most efficient with their spending, achieving the most effect from each dollar spent.

On behalf of Smartsims, we would like to congratulate all those who competed in this year’s competition and wish you well in your future endeavours.