2019 marks the 20th Anniversary of using MikesBikes Advanced at the University of Auckland. The “MikesBikes Reunion” took place on the 25th of March to enable alumni to reconnect with their fellow team members and simulation users.

MikesBikes Advanced is used at an undergraduate level in Management in Dynamic Contexts taught by Peter Smith and Andrew Patterson. As well as at a masters level in Managing People in Organisations taught by Darl Kolb. 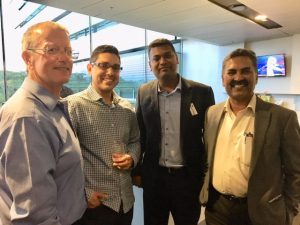 “It was great to catch up with so many former students and hear about their achievements since leaving University. We were also lucky enough to have representatives from Smartsims (the makers of MikesBikes), come along and support the event (many of whom are also alumni too).”

One of two previous Masters student, David Thomas, who wrote their Thesis using MikesBikes data, were present at the reunion. The other was Emma Dawson, who is now based in California. 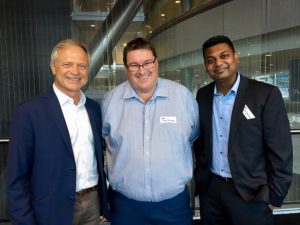 We also met Sajjad Arastu (first person on the right), who is currently sitting in first place in the Single-Player (All-Time) Hall of Fame. 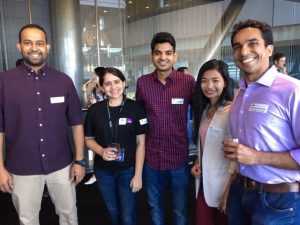 The rest of the evening was spent reminiscing about the fun times, mishaps (where best lessons come from!) and experiences from MikesBikes.

“Students come back to us and talked about how they’ve gone into an interview in the big four accounting firms. They haven’t had any other experience in other organizations, but they can say with pride and confidence that they’ve actually worked in a team that had real work to do. It’s always heartening because it does actually simulate a professional work team. I’ve also had people at a personal level realize that the simulation gives them a chance to think about their own personal direction, who they are and who they want to be. It’s quite rewarding and fulfilling as professor.” 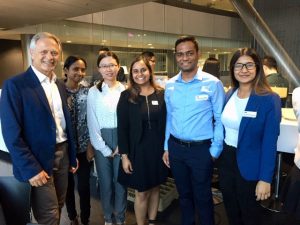 We are only now really appreciating how powerful the use of MikesBikes has been. Darl and I  were struck by the warm feelings the alumni had for MikesBikes and the value they saw in its use. For example, I had a really nice email from one student (who now works overseas and couldn’t attend) explaining how useful he had found the lesson learnt through MikesBikes when he worked in Software Development, and how much its shapes what he does now that he is a university lecturer.

We would like to thank Peter Smith, Darl Kolb and Andrew Patterson for their continued support for the past 20 years. We’re looking forward to many more years of working together!

Photo credit: All photos are provided by University of Auckland and Natalie Newton