“During a research experiment a marine biologist placed a shark into a large holding tank and then released several small bait fish into the tank. 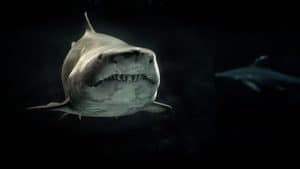 As you would expect, the shark quickly swam around the tank, attacked and ate the smaller fish. The marine biologist then inserted a strong piece of clear fiberglass into the tank, creating two separate partitions. She then put the shark on one side of the fiberglass and a new set of bait fish on the other.

Again, the shark quickly attacked.  This time, however, the shark slammed into the fiberglass divider and bounced off.  Undeterred, the shark kept repeating this behavior every few minutes to no avail.  Meanwhile, the bait fish swam around unharmed in the second partition.  Eventually, about an hour into the experiment, the shark gave up.

This experiment was repeated several dozen times over the next few weeks.  Each time, the shark got less aggressive and made fewer attempts to attack the bait fish, until eventually the shark got tired of hitting the fiberglass divider and simply stopped attacking altogether.

The marine biologist then removed the fiberglass divider, but the shark didn’t attack.  The shark was trained to believe a barrier existed between it and the bait fish, so the bait fish swam wherever they wished, free from harm.”

The short story above is by Marc Chernoff.

What do you think is the moral lesson of this story?

The lesson here is many of us give up after experiencing failures. Like the shark story, we believe that if we were unsuccessful in the past, then we will always be unsuccessful. We continue to see barrier in our heads, even when there are no “real” barriers.

So you are probably reading this article because you want to get out of a situation where you have made mistakes in the simulation and want to fix it, right? Good on you for crossing that barrier!

We cannot reiterate enough how important this is. Many students want to “save” their budget and invest it in other areas in the simulation. However, knowledge is power and by investing in these paid reports, you are making more informed decisions. 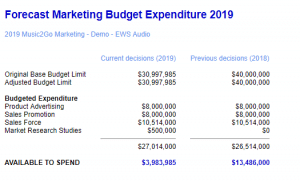 Your budget does not carryover to the next year, so it is important that you spend the entire Marketing Budget that you have been given for the current year.

Price is usually a key determinant of demand and is the most critical component to maximizing your revenue. Therefore, carefully thinking about your Pricing strategy is important as this would have an impact on the demand for your products.

Check out this article on How to Set Retailer Price and Retailer Margin for your products.

Part 2 talks about Misunderstanding the importance of reaching the right customers and inaccurately allocating your Sales Promotion Mix.